A photograph is much more than the two-dimensional image contained within the image's frame. According to visual theorist Ariella Azoulay, "watching" a photograph, rather than simply looking at it, is fundamentally an act of historical thinking, which “entails dimensions of time and movement that need to be reinscribed in the interpretation of the still photographic image” (2008: 14). ​

Example of "watching" a photograph: 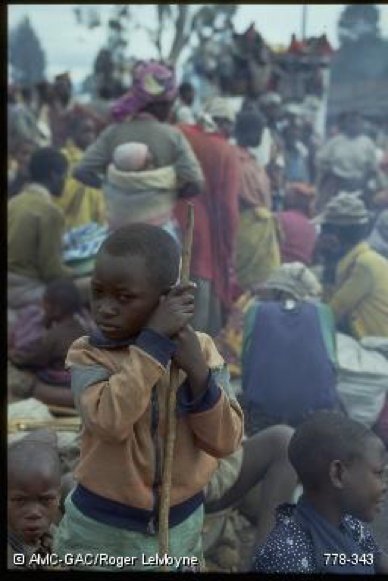 Photographers and aid agencies each frame photographs according to their own politics, experiences and goals. These, in turn, shape spectators’ interpretations of people’s lived realities around the globe, and contribute to formulating responses to humanitarian issues. How have photographers and agencies represented refugees? How have refugees been pictured? In what way does the photographic version change when it has been published?

See how “Refugees on the road between Gisenyi and Ruhengeri,” a photograph of a Rwandan child made by Canadian photographer Roger LeMoyne’s in 1996 for the CIDA International Development Photo Library and published in 2000, can help answer these questions.
1. Compare the photographs: on the cover, the background has been intentionally blurred, and text overlays deliberately isolate the child. This makes the child easier to see as a being in need of care.

2. Roger LeMoyne the cover picture’s photographer, is interviewed in this edition of the magazine (2000).
He expresses a willingness to add nuance to the visual landscape of life in situations of disaster: daily life in contexts of extreme deprivation can still be “happy lives” (page 7).

3. If we look around the child, we see that there is a community. The adults may be preoccupied, but presumably with actively improving their conditions. While the situation is dire, and assistance is likely welcome, the people—including the child—are not passively awaiting assistance.

4. Notice also the other children to the right and left: the one on the right is possibly smiling while the other of the left is more critical. The iconography of misery seeks simplistic passivity, and quiet suffering (pathos) ,when in reality people experiencing desperate situations live a range of emotions. It is unfair to victims to narrowly define them.

5. Children are considered apolitical, innocent and dependent. No matter the political situation their suffering is associated with, a wide range of donors will support care for children. This may be beneficial in the short-term—because aid will come—but in the long-term it has led certain groups of people or entire continents (e.g., Africa) to be stereotyped as infantile and dependent.
​
From 1968 to 2013, CIDA supported numerous projects for refugees and forcibly displaced people around the world. In 2009, CIDA presented its strategy focused on children, including emphasis on three categories: child survival (including maternal health), education access and safety to secure their future. Global Affairs Canada (GAC) supports various development projects to help region cope with the crisis in Syria.  Millions of Syrian refugees pouring into neighboring Jordan made Canada’s priority to support Jordan’s education system for refugee children.
Home