Who or what is a refugee?

A brief history of the phenomenon and the concept...

​A century ago, the term 'refugee' was being applied liberally to civilians fleeing violence and persecution during the First World War. Historian Peter Gatrell (2009) cites the discovery of a word commonly used in Russian discourse at the time that he has translated as "refugeedom", or the conditions and experience of being a refugee. It was only after the end of hostilities in Europe that attempts at formally defining such a group of people began. The 1951 United Nations Convention Relating to the Status of Refugees amalgamated a number of earlier attempts at codifying refugees into internationally recognized language. That definition remains the globally recognized standard
​
Since the end of the First World War, several definitions have been created and disseminated, accepted and challenged worldwide. From the UN Convention Relating to the Status of Refugees, to the 1969 Convention Governing the Specific Aspects of Refugee Problems in Africa adopted by the Organization of African Unity, through to vernacular definitions that include environmental and economic refugees. Parallel to the vicissitudes in defining refugees are visual representations of people and experiences associated with displacement and (re)settlement.

Following a brief look at legal definitions of refugees over the course of the twentieth century is an exploration of the ​photographic situation of refugeedom, which challenges conventional thinking about humans who are or have been on the move.

League of Nations Commission for Refugees, 1921, and
Convention Relating to the International Status of Refugees, 1933 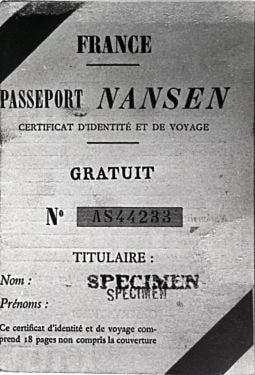 Photo credit: https://commons.wikimedia.org/wiki/File:Nansenpassport.jpg
Early attempts at formulating legal definitions and conventions for refugees emerged out of the population upheaval that resulted from the change in social order following the Great War. These early definitions, from 1921 and 1933, were not legally binding, but provided guidance to states and a degree of protection to refugees. The major distinction between these earlier definitions and that which has become the dominant convention of the twentieth century (created in 1951), is the definition of refugees as identifiable groups of people rather than as individuals. These earlier documents were created many for Russian, Armenian "and assimilated" refugees (http://www.refworld.org/docid/3dd8cf374.html).

​United Nations Convention Relating to the Status of Refugees, 1951 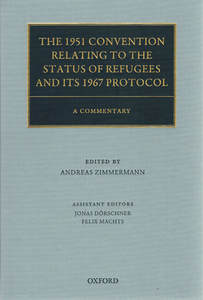 Article 1 is where the definition of refugees that applies to UNHCR activities to this day is found:

"Every person who, owing to external aggression, occupation, foreign domination or events seriously disturbing public order in either part or the whole of his country of origin or nationality, is compelled to leave his place of habitual residence in order to seek refuge in another place outside his country of origin or nationality." - 1969 Organization of African Unity
Legal definitions provide codes and standards of protection and care to refugees. At the same time they become mechanisms of restricting those rights to people who fall outside the limits of term.

Where do the limits come from? Why do they exist? What are the benefits and drawbacks to these definitions?

How can they be justified given these appearances? What ways do photographs impact imagination, understanding and interpretation of refugees and human migration? How do pictures mediate relations and responses to refugeedom?
Click here: Visual representations of refugees in Canadian aid efforts abroad.
home